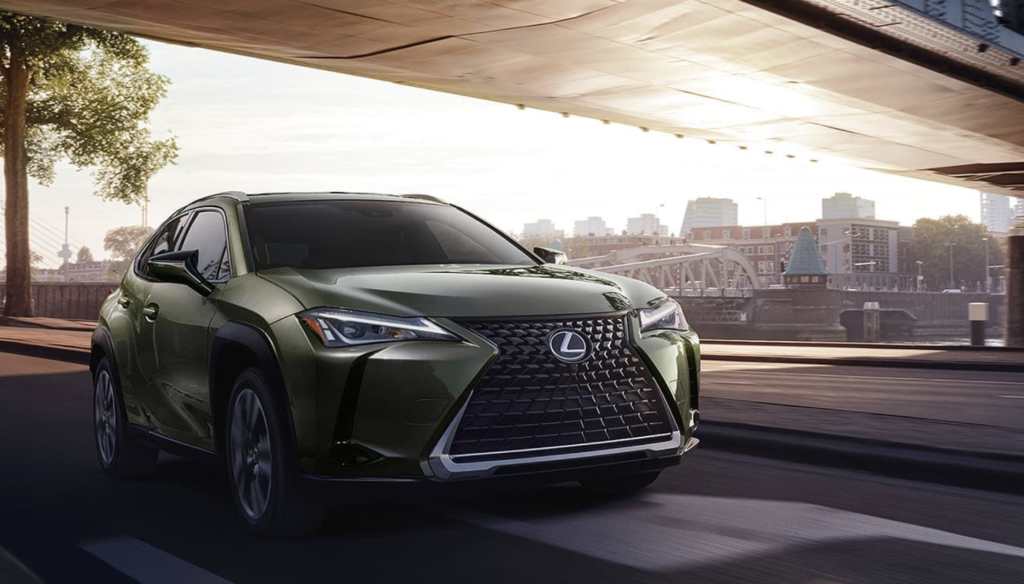 Checking out the Lexus UX Hybrid for sale at Lexus of Pleasanton? This luxury hybrid crossover has earned glowing reviews for its tranquil interior, exciting performance, and smooth handling on Fremont streets. Bay Area commuters know that making the switch to a hybrid SUV can greatly improve their fuel economy, but just how good are the Lexus UX Hybrid mpg ratings? They’re Best-in-Class*! The 2021 Lexus UX Hybrid mpg for city/highway combined is an impressive 39 mpg**, meaning you’ll spend less time at the pump and more time cruising around Dublin.

Whether you’re running errands in Fremont or cruising on the freeway, the 2021 Lexus UX Hybrid enables you to travel further without factoring in a stop at the gas station. There are a total of four Lexus UX Hybrid configurations, all of which feature standard all-wheel drive, so the fuel economy specs are the same no matter which hybrid trim you prefer:

If you check out the Lexus UX Hybrid reviews, there’s a clear commonality between them (aside from the fantastic fuel economy). Almost all of the Lexus UX Hybrid reviews make a point to highlight its premium performance on roads and freeways near Livermore. For starters, the standard all-wheel drive system will be a high point for many Bay Area commuters, as it gives more confidence on wet roads and provides better traction when you’re exploring paths less traveled.

Trade Up for a Lexus Hybrid SUV in Pleasanton

From the Best-in-Class* fuel economy to the potent performance, there are plenty of reasons to make the hybrid switch in a new Lexus UX Hybrid SUV at Lexus of Pleasanton! Contact us when you’re ready to set up a test drive, then value your trade-in online to discover how much your current ride may be worth. In addition to your trade-in value, you can take advantage of the ongoing new Lexus specials at our dealership to bring your luxury hybrid SUV home for even less!

*2021 UX 250h vs. 2020/2021 competitors. Excludes plug-in luxury hybrid vehicles. Information from manufacturers’ websites as of 7/27/2020.
**EPA-estimated 41city/38hwy/39comb MPG for 2021 Lexus UX 250h AWD. Use for comparison purposes only. Your mileage will vary for many reasons, including your vehicle’s condition and how/where you drive. See www.fueleconomy.gov.
Posted in Lexus Model Features

All prices exclude all taxes, tag, title, registration fees, government fees, smog certificate of compliance or noncompliance, emission testing charge and electronic filing fee. Out of state buyers are responsible for all taxes and government fees and title/registration fees in the state where the vehicle will be registered. All prices include all manufacturer to dealer incentives, which the dealer retains unless otherwise specifically provided. Dealer not responsible for errors and omissions; all offers subject to change without notice; please confirm listings with dealer.

All vehicles may not be physically located at this dealership but may be available for delivery through this location. Transportation charges may apply. Please contact the dealership for more specific information. All vehicles are subject to prior sale.

*Available on select New 2022 models. 60 Monthly Payments of $17.96 for every $1,000 Financed. Terms available on approved credit for only very well-qualified customers through participating Lexus dealers and Lexus Financial Services (LFS). No down payment required if qualified for advertised offer. Dealer contribution may vary and could affect price. Individual dealer prices, other terms and offers may vary. Must take retail delivery from dealer’s stock and terms subject to vehicle availability. This offer cannot be combined with Lexus Cash. See your participating Lexus dealer for restrictions and exclusions. Offer available in AK, AZ, CA, CO, ID, NM, NV, OR, UT, WA; void where prohibited. Offer expires 05/31/2022.